The Vehicle On Road Test (VORT) allows students to do a single practical road test to be eligible for a driver’s licence.

Force Driving School recommends having some driving lessons to prepare for the VORT test, as the standard required to pass is very specific. The student must score 90% or better to pass the test. Unfortunately, many people who sit a VORT test without prior training tend to fail.

A driving instructor that trains a student cannot do the testing. The test must be done by another “Authorised” examiner.

The VORT test’s date, time and location must be registered with the Department of Planning, Transport and Infrastructure (DPTI) at least three days prior to the test date (we do this so you don’t have to). Please keep in mind, however that the examiner will likely need more time than that to fit your request into their schedule. We generally recommend giving at least week’s notice to improve your change of getting the time and date you want.

If a student fails the test they must wait a prescribed number of days before they can do it again.

The VORT test involves a drive of approximately 30-45 minutes and consists of three components:

A student must achieve a score of at least 90% to pass the test. 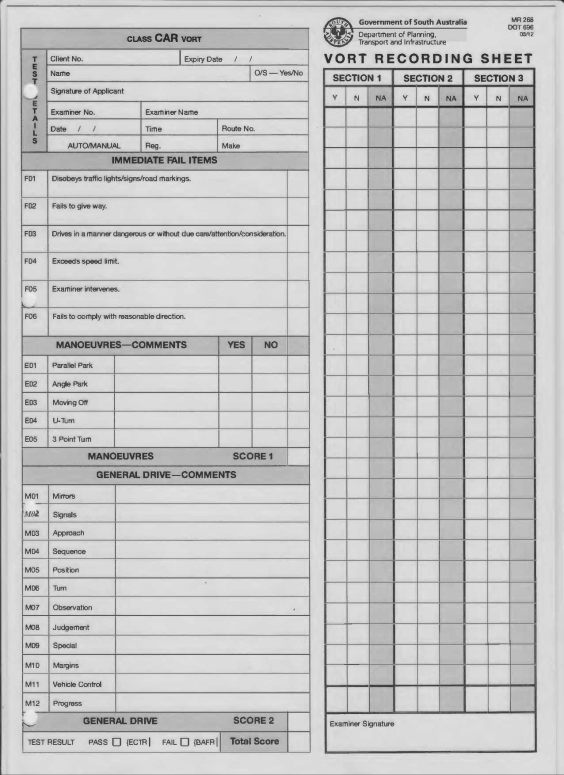 100% Road Law must be obeyed at all times during the general drive, and while demonstrating the low speed manoeuvres. Any breaches will result in an instant fail.

There are five low speed manoeuvres worth 2% each for a total of 10%. The standard for these tasks is very high and they must be demonstrated as described in detail in the “Driver’s Companion” CBT&A section (yellow tab).

The low speed manoeuvres include:

NOTE: The vehicle must not touch any kerb and must stay within the boundaries as stated by the examiner (e.g. Between the kerbs)

NOTE 1: If another vehicle pulls up behind then the driver must abandon the U-turn and just turn right, into the side road. While it is not strictly illegal to do a U-turn if there is a car behind, it can prove to be a dangerous undertaking.

NOTE 2: Also if another vehicle is waiting to turn right from a side road which will be used for the U-turn then the driver must abandon the U-turn and turn right. Apart from being a dangerous situation the driver must give way to the right turning vehicle and not cause confusion by cutting in front of them.

NOTE: Appropriately parked is defined as:

NOTE: For all low speed manoeuvres

The low speed manoeuvres should typically be performed at no more than walking speed with quick hands on the steering wheel: Roll slow, steer fast! This is harder than it sounds, requiring significant co-ordination between the hands for steering and the right foot manipulating the brake and accelerator to control the car’s speed. There are also observations, over the right/left shoulder and to the rear, to be carried out as well as the manoeuvring procedure to remember!

The test requires that a student achieves an overall score of at least 90% (combined score of the general drive and low speed manoeuvres). It is expected that the System of Car Control will be used consistently throughout the drive.

The student must achieve a minimum of 90% to pass. The low speed manoeuvres make up 10%, that is 2% each with no partial marks (you either get the 2% or nothing). The remaining 90% is marked on the general drive.

During the VORT the assessor will be marking a recording sheet for specific items during the drive.

Here is a list of common faults to illustrate the standard that is required to pass:

Incorrect positioning (too far forward/back or to the left/right)

Missing an opportunity or choosing a gap causing minor adjustment of speed of other road users when:

Failing to follow the correct sequence for the SOCC

Any breach of road law will result in an instant fail, as will having the examiner intervene either by physically taking control of the car (brake, steering) or instructing/advising the student to avoid a dangerous or embarrassing situation (eg. to avoid being left stranded in the middle of a traffic light intersection).

Here is a list of common road law breaches that result in an immediate fail:

By any amount including:

Failing to comply with reasonable direction:

Intervention by the examiner either verbally or physically to: